West coast is a very small section of the nation that only consists of three states: California, Oregon and Washington. I was hoping I could cross off west coast soon and finally hit the east coast finally. My parents took us traveling often as kids we actually made our way to many of the west mountain states as well as some of the midwest states. I definitely want to hit the south some time soon as I would love to eat, see and hear NOLA (New Orleans, Louisiana) culture.

Anyways, my first east coast conquer was New York to which I wanted to go for New Year’s. Spending $1500 on a last minute flight booking for 2 people definitely was costly, lesson learned to always plan ahead and book early. Always be on the lookout for deals that way you don’t spend a chunk of money too soon to the dates you want to travel at. If you have the extra money (and with the addition of planning early to get good deal flights) I always recommend to upgrade to business economy or maybe even first class (if there is no business economy). Domestic flight planes are much smaller than international flight planes. Albeit also true that sometimes domestic flights are small enough to be considered jet sized and the seats are actually VERY roomy and comfortable for basic economy (although only sits about 20 people). Our flight was of course not the latter option and was for the mass public domestic flight kind. Let me just say that sleeping on economy was terribly stuffy and cramped for the 5.5 hours we were in the air. LOL.

Like San Fran, New York is also a very cramped city type setup and not much space for suburban single house family houses. I booked a private room in Brooklyn through Airbnb. Josh whom was our host was beyond amazing. He was probably the most detailed host I’ve ever booked with. He sent me images of his house and where to find the keys, what and where the train stations were to take to get to local good museums and restaurants before we landed. Through this living arrangement I actually found Brooklyn to be one of my favorite cities in New York compared to Manhatten, Chelsea, and main New York. It was quiet, the roads were wide and not cramped with traffic and bodies of people. There was always enough room to walk around comfortably. 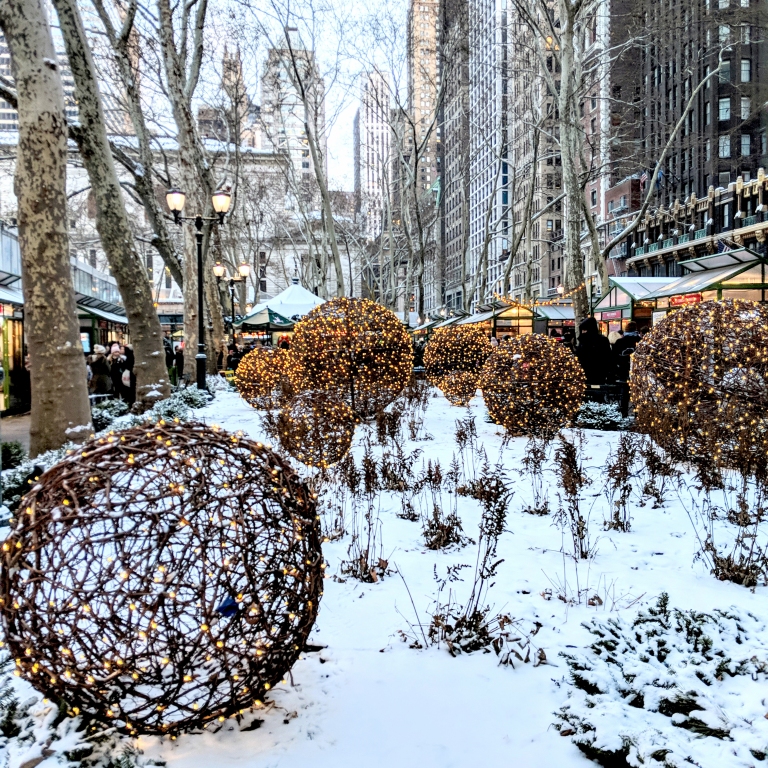 After we landed (Saturday morning), we took the LIRR (Long Island Rail Road). This is different than the subway so you can’t use a Metro Card. You will have to purchase a separate LIRR card and add enough cash to get you to where you want to go. It’s roughly $5.00 a trip, but the train itself is very nicely built and cozy compared to the subways. Seats were cushioned, cozy and spacious. So we took the LIRR to the outskirt station of where our Airbnb was located and proceeded to hail a Lyft Line to last few minutes of distance. We dropped our luggage off and started our day early so we can hit the places we wanted to see.

Let me just say, east coast is COLD, VERY cold. I thought if I just stacked sweaters I’d be fine. NOPE. That wasn’t a smart idea. I ended up wearing 2 sweaters and a double breasted coat to barely start covering the cold temperature. Invest in a good parka and thick furry lined gloves, some comfortable and thick walking boots if you decide to visit the east coast in the winter. It’ll keep you warm and you’ll get to enjoy the trip more. Trust me when I say this, east coast cold is a on a WHOLE new level. LOL.

Our main mode of transportation was utilizing the subway, it’s definitely the cheapest and easiest method of travel when in New York. It’s nice that the train has heater, although when it gets busy, it’s very cramped and awfully humid because of the snow’s moisture and body heat. It was also very nice that Google Maps has a train schedule laid out so we always had access to when and where our stations were going to be at and what time it was leaving. I definitely recommend using that app when traversing the city via subway.

First stop, we headed to a Brooklyn classic Tom’s that served breakfast and lunch. We grabbed breakfast at 8:00AM when we realized it started to snow! It was magical, being a SoCal kid, I’ve never seen east coast snowfall before, little white flakes falling from a somber sky of grey. It was breathtaking! After breakfast we headed to Tiffany’s Co. So I could do the touristy shot of “Breakfast at Tiffany’s”. It didn’t quite turn out the way I wanted since there was just SO many people walking on the streets outside Tiffany’s. After, we walked to Trump Tower Hotel, Central Park, and around to Rockefeller Center and rink, grabbed a tomato soup and croissant at Bouchon Bakery. I will admit New York is gorgeous in falling snow, especially in Central Park.

We then made our way to Time Square, it was clogged more than usual because the city was getting ready for the New Year’s Ball Drop celebration to which we had planned to attend. We continued to traverse to Grand Central Station, also a gorgeous place for photos, but with tons of tourists. We ended our Saturday site seeing with the Empire State Building and the Flat Iron. The Empire State building line was over an hour long we decided to just look from the outside. We then grabbed a bite to eat at a nearby Shake Shack because it was too cold to walk anywhere else further. The following Sunday we finished off the rest of our site seeing list with the World Trade Center Memorial Site, Statue of Liberty, The Raging Bull and walked around Wall Street and took some photos of the stock market buildings.

The World Trade Center Memorial was beautiful memorial to all the innocent souls that were lost on 9/11, I loved the class of the dark granite and reflecting pools of cascading water. It definitely gave a sense of hope and renewal. After, we went into Westfield World Trade Center which is a HUGE shopping center in location with the other World Trade Center buildings. It’s one of the largest shopping complexes in Manhatten! I did enjoy the amount of store and food options there were inside and loved how it was connected to other buildings via underground.

Finally we decided it was time for us to head back towards Time Square in hopes of grabbing dinner before finding our way to where the ball drop for New Years was going to be. Unfortunately, this was where shit went downhill. We took the subway to 42nd Street Time Square Station as directed by city posters all over New York that that was where the entrance to the ball drop was going to be and all are free to come and participate in the festivities. We made it there and were told by NYPD that nobody was getting in from 42nd Street Station and that we would have to walk back to 38th Street Station to enter. So we did. Come 38th Street, there was already a large crowd– sounding rather upset too. Why? Because the street was gated off and surrounded by NYPD. We found out people weren’t allowed to enter from there. What. The. Fuck. We ended up waiting for over half an hour to see if we can get any answers from the cops working the event. Nothing. Finally, one of them said we can try making our way to 52nd Street and enter from there. That’s 14 blocks away. UGH. I wasted $1500 on flight tickets to be here for this event, so I can’t give up.

What really sucked was a few blocks in that there was actually an opportunity to get in, but I was grabbed by NYPD saying that anyone with backpacks and purses were not allowed into the ball drop (even though there were electronic road signs that says there will be bag and purse checks before entering -_- ). I was furious, that meant there was no chance of me getting in because I had a backpack on even though I even showed him that all there was was a bottle of water in it. He still said no. I made my way to 52nd Street anyways to try again. Boyfriend and I got there and saw that there was a massive amount of people. Again, NYPD were refusing to let people in and even sarcastically joked that we should’ve been there at 5:00AM in the morning if we wanted to get in and being there was essentially useless right now, nobody was getting in. Do you know how frustrating that was? YEAH. The whole experience was a load of hypocritical BULL SHIT. NYPD gave us the runaround for OVER an hour in 12 degree weather. The ball drop area wasn’t even crowded!

We ended up giving up, we were tired, freezing, and hungry. It was because we wasted so much time on trying to get in that most of the restaurants were closed since it was 10:00PM already. We luckily found Chop Shop II (review soon!) that was still open and headed there to grab a nice warm dinner, we took an empty subway home and watched the ball drop from our laptops at midnight even though the actual scene was only a few miles away. I was devastatingly bummed. It wasn’t the best first impression of New York’s finest nor was it an experience that I enjoyed. The one thing I wanted to do and I wasn’t able to because of all people: the police. Conclusion: It’s definitely not something I would do again. It’s glamorous on television, but definitely very difficult event to get into in person. I would probably try and aim for a warmer travel date as well as a non-holiday to New York if I wanted to come again.

At least I got to shop around Time Square on Saturday and got to see everything I wanted to see (albeit would try again for the Statue of Liberty since it was far too cold to take a ferry to see it up close in December). Check out our video for a peek into our New York trip!