Located in the often busy Chino Spectrum Towne Center, it’s neighbors include popular ones like Jollibe and Frostbites. The parking is spacious although cramped because everyone shares the parking lot with the rest of the plaza that has Walmart, Sam’s Club, Best Buy, Marhsall’s and the like. Even handicapped spaces are relatively filled up most of the time in this plaza although they’re available and there for those that need it.

Since my recent introduction to the poke world (I’m no super pro on fish or anything), I’ve been looking at places to try. Only thing is, I don’t like fish and the only seafood I eat is lobster and shrimp. The poke place I frequent near my house (Mr. Poke) offers baby lobster and shrimp while Ichi Poki offers only shrimp (I was downtrodden a bit about that). But Ichi Poki did offer an array of OTHER proteins like octopus and squid which is great for those that enjoys cephalopods.

There was an average number of customer eating in store and nobody in line when we walked in. Ichi Poki had three sizes available ranging from small: 2 scoops, medium: 3 scoops to large: 5 scoops ($10.95). Boyfriend ordered a medium while I ordered a large and I noticed their bowl sizes were exactly the same so I was a bit bummed that the only portion change difference for each size was the scoop amount rather than actually having a physically bigger bowl. Usually a bigger bowl for bigger scoops means one gets more more base + add-ons like Mr. Poke near my house in Walnut does. 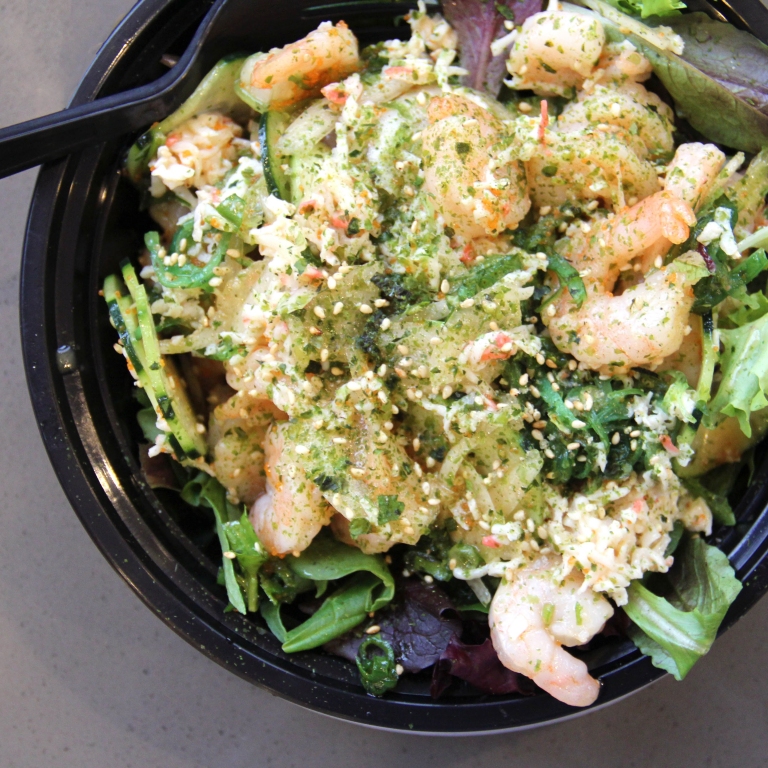 My large bowl I got a base of mixed green salad (they also have white and brown rice), five scoops of shrimp, seaweed salad, cucumbers, crab meat, white onions, green onions, cilantro, and furikake (sesame and roasted seaweed) with a drizzle of sesame oil and ponzu sauce for my sauce choice. My boyfriend got a medium bowl of mixed green salad base, five scoops of spicy tuna, Ichi sauce, avocados, and crab meat. His three scoops of fish alone looked as much in portion as my five scoops of shrimp. Eh. Could’ve been better if the bowl sizes differed, I wouldn’t have mind paying more for that change.

My bowl while it was good, nothing really stood out to me, although I always had a belief that it’s hard to mess up shrimp poke bowl (as opposed to fish) if your crustacean is decent and fresh enough. I did enjoy the fact that their shrimp wasn’t overcooked and chewy rather was perfect where it had that crunchy texture. Other than that I was basically having a shrimp salad with a drizzle of ponzu and sesame oil as my dressing for $11.50 after tax and tip. As for my boyfriend’s spicy tuna bowl he wasn’t impressed by how small the fish cuts were, they were only cut about 1/4 inch pieces each. We also got a two free corn miso soups via our Yelp check-in, boyfriend didn’t like it and I wasn’t too big of a fan of it either. The soup tasted really thick for a miso soup and the subtle flavors of the corn just didn’t meld well together in my preference.

The staff was nice, but the guy that did my bowl seem overly surprised that I didn’t want fish in my bowl when I asked for five scoops of shrimp and he had to ask me if I was sure if I only wanted shrimp. Yes, that’s why I said all five scoops to be shrimp the first time. -_- He also seemed overly persistent in thinking I wanted everything in my bowl. I didn’t and found it tiring to constantly push back and kept needing to say “No, thanks!” firmly.

Probably will try out other places first before coming back here again if we’re ever in Chino Hills area.

For more photos from our meal at Ichi Poki, click here!