It’s been excruciating few weeks since my awesome road trip to Utah with amazing friends. I say excruciating  because my soul is currently slowly withering inside from the lack of travel that’s done in August. 😩 I recently found a quote that resonated with me far more than I thought it would:

“Traveling messes you up, but in all the good ways. It leaves you always craving more, and addiction that can never quite be met. Every place, every trip, every person is a new adventure; pulling you deeper into the love of wanderlust. Your heart begins to hurt when you’re standing still, and your mind begins to itch over the idea of new places you haven’t been. Fill your soul with adventure and traveling and you will live a fulfilled life.”

It’s amazing what travel does to one’s consciousness (you can say ‘soul’ I suppose, but I’m more for the logic and science side of things).  I really wish I had the funds and travel logistics to do it more often but I also have to think about the amount of effort I put other people in to satiate my travel needs (be it time off work, packing, driving, etc.) Whilst I wholeheartedly believe in solo traveling (some time alone to find yourself is always beneficial and great for one’s mind), but David also gets really sad when I even mention leaving him behind to adventure alone. 😂 So I always try my best to work around both his and my schedule to the best of my ability (it’s much easier said than done, believe me 🙄). 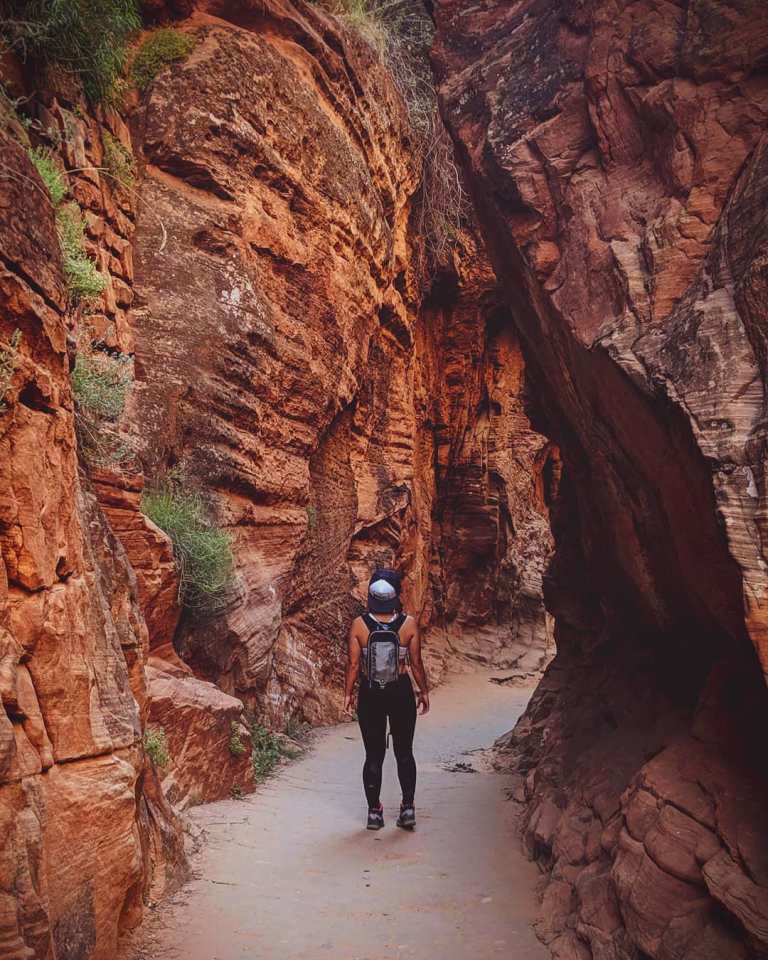 Our most recent 1200 mile road trip took us to Zion National Park, Utah where we ascended the infamous Angels Landing. It’s an absolutely stunning hike that’s worth experiencing at least once in your life. I definitely recommend coming early before the crowds set in though. It’s much quieter and nicer to hike without the horde of people (unfortunate side effects of social media and having the internet).

If you have a fear of heights on the higher spectrum, it’s definitely not a place for you to face it. I’m talking from experience. LOL. Although it’s still doable for those that only have a minor fear of heights. If I had true acrophobia, I definitely wouldn’t be able to do this hike. First half mile and you’re already pretty high up. Starting this hike early will also help you beat the heat during the summer time. We started around 6:00-6:30AM so that most of the trail was still shaded by the mountains. I originally wanted to arrive even earlier but waking up in the wee hours of the morning had always been my kryptonite. Instead of leaving at 5:00AM like I wanted to, we ended up leaving closer to 5:40AM and getting to the Zion Visitor Center parking lot at 6:00AM. Good thing we lived only 20 minutes away from the park.

Another great thing is that the park offers free shuttle service to all 8 stops of the park taking you from different areas like Angels Landing trail starting point and The Narrows. You park at the Zion Visitor Center that has a pretty spacious parking lot (again, come early because it fills up fast). But if you manage to leave early enough you can drive yourself up to the actual stopping point and parking lot of stop 6: The Grotto. It’ll save yourself the waiting and shuttle driving time. The first shuttle bus leaves at 6:00AM in the morning.

The Grotto Trailhead/picnic area is the starting point where you’ll be crossing a bridge of rushing fresh water river that will take you to a part of Kayenta Trail. Then keep going forward and you’ll find yourself on West Rim Trail and inside Refrigerator Canyon. This is the shadiest bits of the canyon so you can take your snack and drink breaks here if needed. The first mile wasn’t [too] bad, it’s mostly paved trail. It’s once you hit the switch backs, it can get gnarly. The heat can also get pretty intense by early afternoon. Bring enough water (2L per person) and energy bars to keep yourself hydrated and fueled. You’ll follow the trail until you finally hit Angels Landing Trail. The first 1.5 miles overall weren’t too hard, only strenuous due to intense incline of the switch backs. It’s really the last half mile you have to worry about.

Once we reached the last half mile at Scout’s Landing (this is where Angels Landing chain rail trail starts). When we attempted to start the mountain scaling, I felt my fear start to paralyze me. What I thought was two chains was only one, so the other side it’s just you and the side of the mountain, one wrong move and it’s adios! After half a dozen attempts I ended up not doing the last half of the mile and waited for my group at Scout’s Landing. There’s no shame in not doing this part as I wasn’t the only one, there were about 6-7 other people waiting for their friends to finish to the top when we arrived. I didn’t want to end up being that one person that was holding everyone up and becoming a burden and hazard. Your own survival and well being matters, so do take it into consideration. It also gets dangerous just by the sheer amount of people that’s trying to hike to Angels Landing. It can get very crowded, especially by mid-afternoon during tourist season, weekends, and holidays where there’s a high chance of gridlock (some of the chain areas are only 2-3 feet wide) so you might be hanging onto the chain, at the side of the mountain until your turn.

It took us about an hour to reach Angels Landing, we hung around to take some photos and rest break. Upon our descent around 9:30-10AM, the sun was already pretty high and temps were rising. The once shaded trail was now covered in sun. I highly recommend having a hat and consistently reapplying sunblock as needed. The overall physical hiking took us about 2 hours and 45 minutes for those that were more active, but with photo taking time, it was around 4 hours to do the 5.2 mile hike.

If you have any questions about this hike, leave a comment below!