Apparently I’ve had this place bookmarked for awhile (I have many brunch places bookmarked but usually remember the ones I really want to go to LOL. Just surprised one this one looked so good on Yelp! slipped my mind). I’m just happy since I’m always down to find new brunch places to try. It’s located in Fairfax/Hollywood not too far from The Grove called Eat this Cafe. It’s not very visible passing on the street. They have a small awning that has their name printed on it as well as a tiny logo on their window. If it weren’t for the fact that I was looking for them I would’ve never noticed.

Their building actually looks pretty derelict to be honest. I’m not sure if it’s intentionally designed to look really old and used, but the outside walls had patched from it that was missing. The window metal frames looked really old and felt like it was going to fall apart. Anyways, we found it and while they do not have their own parking lot, they do have metered parking on the streets as well as a residential area that may or may not have free parking space depending if it’s busy or not. We found a spot relatively far and had to walk some distance before getting to the front door. Once we arrived we noticed that the inside was VERY warm and was notified that their A/C was broken. Although the fan was on and they provided us 10% off our bill for the inconvenience because it was unfortunate that it was also a very warm weekend. It was nice of them to compensate a little for something that was out of their control really. 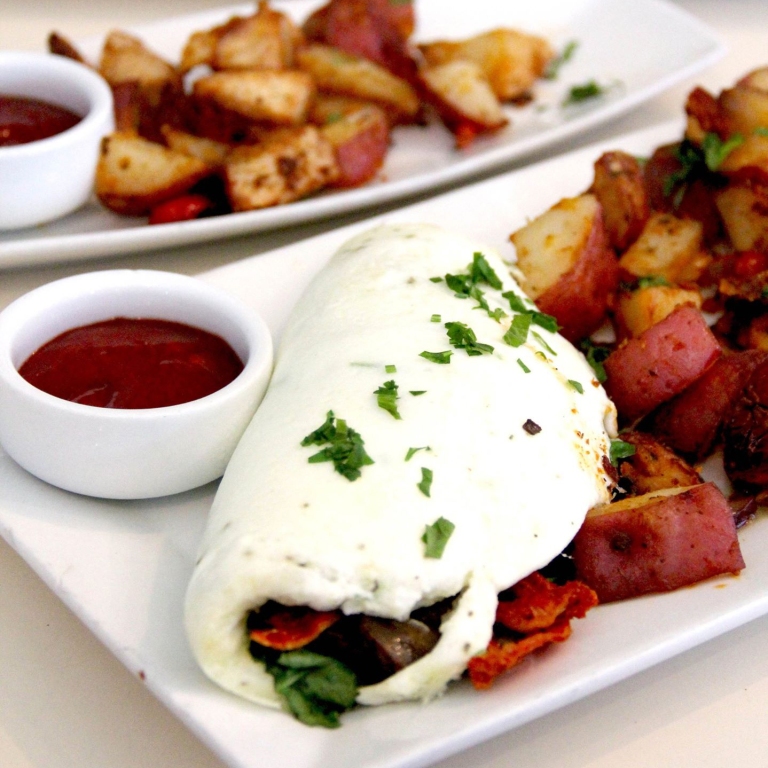 The place was pretty small, sits maybe 25 at most (that’ll be full house by then). They have a front counter that also has a showcase fridge full of pastries and pies if I remember correctly. We were sat promptly, thankfully it wasn’t busy yet, although about 10-15 minutes later, it got pretty packed. Boyfriend and I ordered a Crab cake Benedict with side of roasted red skin potatoes and I ordered an egg white vegetarian omelette filled with sun dried tomatoes, mushrooms and spinach with the same side. I LOVED how they made the egg white part, it was so soft and fluffy but with enough bounce left like you would expect out of a egg white, it was so good texture wise. I also loved the mushroom ratio as it provided a nice earthiness to the dish, although I realized I should’ve went with fresh tomatoes instead as the sun dried flavor was very potent and overwhelming due to it having a larger ratio than the mushroom and spinach. The boyfriend enjoyed his Crab cake Benedict, the eggs were perfectly poached so that the yolk flowed out, but the Sriracha hollandaise sauce he found too much and overpowered the overall dish. I definitely enjoyed their roasted potatoes as well, it was not deep fried which I really appreciated so that it was just this really nice soft small chunks of potatoes tossed with really nice herbs with just the slightest crisp of a skin on the outside from being pan-fried.

It was actually really good food providing breakfast and lunch dishes. It’s definitely worth checking out. The staff was nice and accommodating and we left very satisfied with our dining experience! 🙂 Only complaint is that they can be relatively busy/popular and it gets really crowded because their space is small. My chair was hit several times with passing servers because it was so close to the other table and there just wasn’t much room to move around freely.