So my usual go-to for chicken breasts and thighs are just to salt and pepper them and then stick them in the oven to bake until ready. I thought it was time for me to change it up a bit and so I’ve been looking through plenty of recipes to pin the ones I like on my Pinterest board for later attempt and recently found this really nice one that reminded me of another recipe that Alton Brown had tried with ramen. It’s foiling. You basically put the food you want to cook into the foil, wrap it up and stick it on the grill or oven and let it steam itself to perfection. Alton did it with ramen and this recipe is for chicken.

The original recipe was a little bit different than the one I attempted. They had corn, spinach and no chicken broth, but knowing my own and David’s taste preferences I swapped and added some ingredients of my own. I had tweaked the recipe with its ingredients a bit but it was delicious nonetheless! 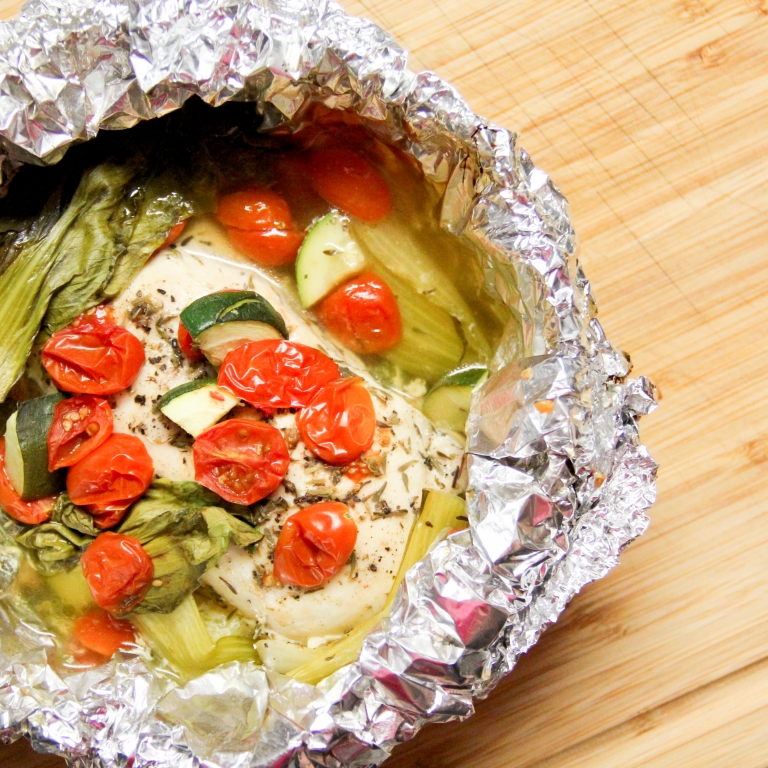 Preheat the oven to 400 degrees then cut 4 sheets of foil about 12″ long then shape them into a bowl like shape for the broth to stay in. Place these four foils on the baking tray and top each piece of foil with a chicken breast, tomatoes, zucchinis and bok choy. Pour 1/4 of cup of broth into, add salt and pepper with dried thyme for seasoning.

Then fold foil packets crosswise over the chicken and vegetable mixture to completely cover the food. Roll top and bottom edges to seal closed. Bake until chicken is cooked through and vegetables tender, 20 to 30 minutes.

The recipe came out wonderfully, the meat was soft and tender with the savory flavors of the chicken broth infused with the thyme made the flavors very yummy. We loved the boiled vegetables, the sweet and tanginess of the cherry tomatoes complemented the bok choy and zucchinis perfectly! I loved that the cherry tomatoes ended up having this amazing almost sun-dried quality to it. They weren’t under cooked either and were soft to the taste. I was pretty impressed with myself seeing as how I started this journey I would’ve probably burnt down the house by the end of dinner. LOL. At least now I can actually turn out something edible! I hope you guys enjoy this recipe as much as I do! 🙂 Bon appetite!